Show Me The Money! Pelosi and McConnell’s Homes Vandalized Over Stimulus Check Hold-up 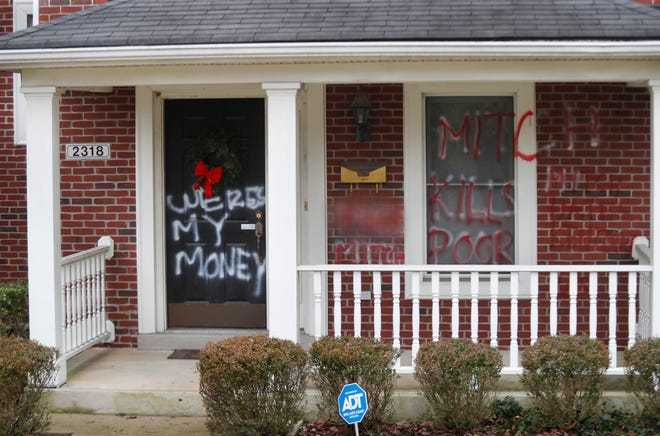 After debates over increasing direct stimulus payments to Americans from $600 to $2,000 failed to pass in the Senate, some individuals turned to vandalism. “WERES [sic] MY MONEY” was written in white spray paint Saturday morning on the front door of Senate Majority Leader Mitch McConnell’s home in Kentucky. On one of the windows, the vandal wrote, “MITCH KILLS THE POOR.”

House Speaker Nancy Pelosi’s San Francisco home experienced a similar incident. On New Year’s Day, one day earlier than McConnell, phrases such as “$2K,” “Cancel rent!” and “We want everything” were spray-painted on the garage door. Additionally, a pig’s head and fake blood were left on the sidewalk.

McConnell lambasted the attack on his home saying, “I’ve spent my career fighting for the First Amendment and defending peaceful protest… I appreciate every Kentuckian who has engaged in the democratic process whether they agree with me or not. This is different.” He added the vandalism was a “radical tantrum” part of a “toxic playbook.”

“Vandalism and the politics of fear have no place in our society. My wife and I have never been intimidated by this toxic playbook. We just hope our neighbors in Louisville aren’t too inconvenienced by this radical tantrum” added McConnell.

Before signing the latest $900 billion coronavirus relief bill, President Trump labeled the package as “a disgrace” with only a “measly $600” in individual direct payments. Trump asked Congress to increase the payments to $2,000 which led to a bipartisan effort to “pass a stand-alone measure on the $2,000 checks, supported by some Republicans in both the House and Senate. McConnell blocked the initiative on Wednesday” reports National Review.