A serious hat tip to Rush Limbaugh. On his Monday show Rush talked about a very interesting photograph of California Democrat Senator Diane Feinstein talking in a Senate corridor with Alaska Republican Senator Lisa Murkowski. Feinstein was in staunch opposition to the confirmation of Brett Kavanaugh to the Supreme Court and is equally opposed to President Trump even making a nomination to fill the now-empty seat of the late Justice Ruth Bader Ginsburg.

While Murkowski wants the nomination postponed until after the election, since the Trump announcement of a nominee will not be made until the weekend – after Ginsburg has been buried – there is no indication of how she would vote on a nominee. And oh yes, the President himself has said his list is made up of five women. 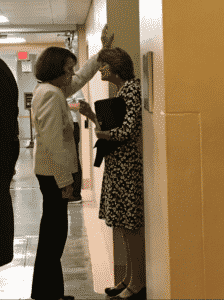 With this in mind, Feinstein cornered Murkowski – literally physically. There are two photographs of the moment. The first captured both women full length. It shows Feinstein, decidedly intense, standing almost nose-to-nose with the Alaska Republican, with her left hand pushed against the wall next to Murkowski’s head. See it here.

But the second, close-up photo is a mostly headshot of the same moment. And what a revealing close-up it is.

See for yourself. There is Feinstein, clearly furious, jaw clenched, glaring at her colleague. With Murkowski against the wall, meekly saying something, gesturing with one hand, eyes closed. 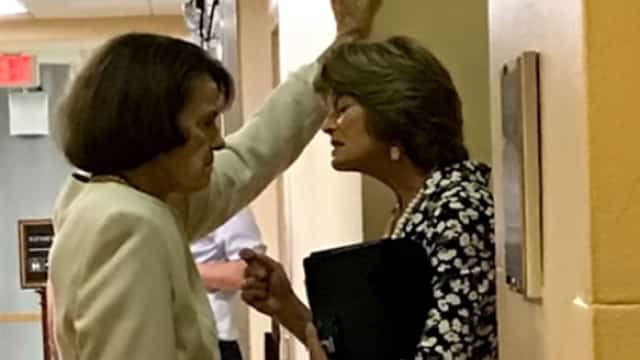 As Rush pointed out? “Dianne Feinstein is bullying poor little Lisa. The Democrat is bullying the Republican babe.”

It certainly looks that way.

In a blink these two images have captured exactly the mindset of the American Left.

Let’s be plain here. What you see in these photos is the Democrat Senatorial version of what’s happening in the streets of American cities. The message, whether it’s a brick through a window, burning a police station or bullying Lisa Murkowski is exactly the same: