Trump Attorney: ‘So Much Evidence’ On Election Fraud, Feels ‘Like It’s Coming In Through A Fire Hose’ 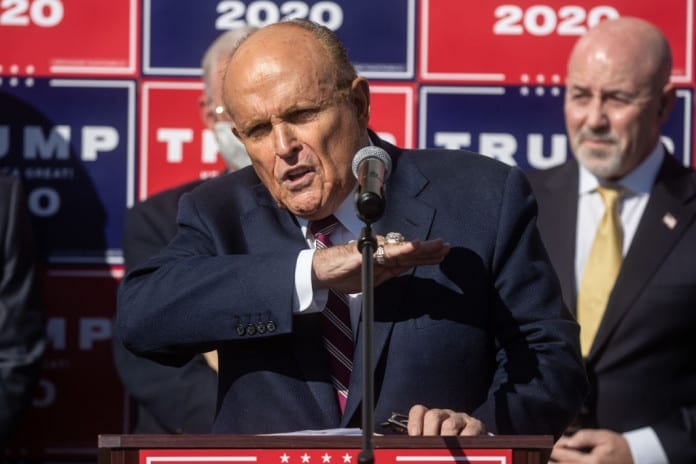 Giuliani, the current lead of Trump’s post-election legal battles, insisted the election results will be “overturned” from Biden to Trump as the rightful winner. Giuliani says significant “evidence” of “corrupt machines” that had deleted millions of votes for Trump exists.

In the key battleground states, which Trump was leading in the middle of the night on election night, only to suddenly switch to Biden within early morning hours, Giuliani says there is an explanation. “In every one of those states, we have more than enough illegal ballots already documented to overturn the result in that state.”

Giuliani explained “they didn’t allow Republicans in those key places to observe the-mail vote. That makes the mail vote completely invalid.” Adding, “we already have enough affidavits from people who were pushed out from being able to observe, so in each one of those states that he lost narrowly, he won those states probably by 2, 3 percent.”

Sidney Powell, one of Trump’s attorneys, confirmed Giuliani’s claims, stating “President Trump won by not just hundreds of thousands of votes, but by millions of votes that were shifted by this software that was designed expressly for that purpose.” Powell’s reference is to a Canadian voting software company, Dominion Voting Systems, which provided machines used in 28 states.

Giuliani and Powell claim the machines deleted votes for Trump and/or switched votes initially made for Trump, to Biden. “We have proof that I can’t disclose yet” Giuliani explained of the “corrupt machines.” “We have so much evidence, I feel like it’s coming in through a fire hose” said Powell.