If having the same childhood as her dictator brother is any indication, the world could be in big trouble.
Lord Staff 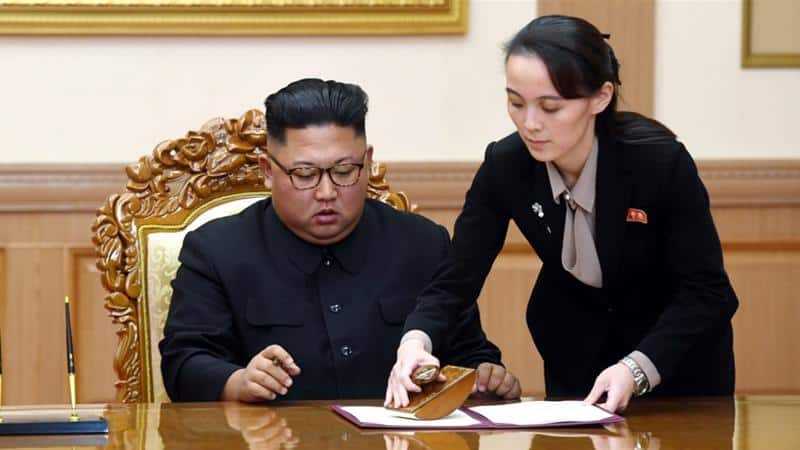 Although it is virtually impossible to get any information, let alone truthful intel from North Korea, rumors are running rampant that the North Korean leader is in bad health. It is widely believed that Kim is in poor condition following cardiac surgery on April 12th. As VICE News puts it, “the truth is that no one outside of a tiny group of North Korea’s ruling elite knows how ill if at all, Kim is.” We can, however, take into account “rumors about the dictator’s poor health since last summer, and given how morbidly obese he is and his family’s history of heart disease, it is no surprise that attention is now turning to his successor.”

Just as speculation is the best we have when it comes to the dictator’s health, the same goes for what would happen in the event of his death. As of now, it is believed there is a high probability Kim Jong Un’s 32-year-old sister, Kim Yo Jong is being groomed to fill the role. As VICE reports, the younger sister has been “at her brother’s side throughout his reign, attending many high-profile summits, including the two meetings with U.S. President Donald Trump in 2018 and 2019.”

According to experts VICE News spoke to, some believe it is “impossible” for the young woman to “take control of a country run by an elite group of powerful men” while others say she’s the “natural successor to Kim and that her recent high-profile public engagements show she is being groomed.” What constitutes “grooming” for a dictator may not entirely be clear, but reportedly the sister “saw Kim’s ruthless nature up close, including when he ordered the execution of their uncle Jang Song Thaek.”

Clearly the young woman was not shielded from the family’s leadership tactics who executed the uncle in 2013 for accusations of “corruption, drug use, gambling, womanizing and leading a ‘dissolute and depraved life.” After her father, Kim Jong Il’s health went south after suffering strokes, she “helped plan her brother’s ascension to the position of Supreme Leader in 2011, when her father passed away.”

If having the same childhood as her dictator brother is any indication, the world could be in big trouble.

At the age of 9, Yo Jong was sent to Berne, Switzerland for schooling. She and her brother, Kim Jong Un lived together, and “it was here that she forged a close bond with her older brother…the pair shared a private home and were attended to by their own chef, housekeeping staff, and bodyguards, according to North Korean Leadership Watch” reported VICE.

If having the same childhood as her dictator brother is any indication, the world could be in big trouble. Yo Jong returned to North Korea in 2000, after “having completed the U.S. equivalent of sixth grade.” In 2002, her father declared his youngest daughter “Was interested in politics and wanted a career in North Korea’s political system.”

Sung Yoon Lee, a Koreas expert at The Fletcher School of Law and Diplomacy at Tufts University told VICE “it is entirely possible that Ms. Kim will prove even more tyrannical than her brother or father or grandfather.” Isn’t that just great? Lee added, “she will also have to show her mettle by provoking the U.S. with major weapons tests and lethal attacks on South Korea and U.S. forces stationed there.”