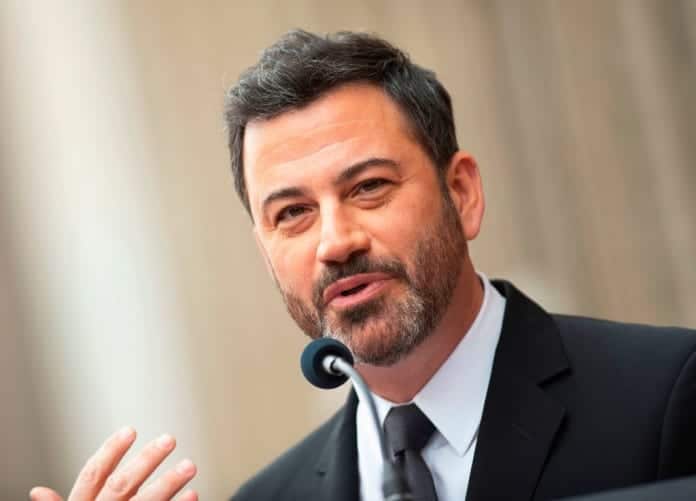 Wow. So there is this about ABC’s Jimmy Kimmel over there on Wikipedia.  (With bold print supplied.) In yet another boring woke attack on Donald Trump, this time Jimmy zeroes in on Christopher Columbus because, but of course, it was Columbus Day. Said Kimmel of Trump:

“He and Christopher Columbus actually have a lot in common. They both spread disease, and both failed spectacularly at what they were hired to do.”

Did Columbus reach what would be eventually known as the “New World”? Yes. Was he a perfect soul? Like all other humans then and now, no. But without Columbus, Jimmy Kimmel would not be on television.

Say what? Take a look at Kimmel’s Wikipedia bio:

“Kimmel was born in Brooklyn, New York, and grew up in the neighborhood of Mill Basin[3] as the eldest of three children of Joan Iacono and James John Kimmel, who worked at American Express and was an IBM executive.[5][6][7]

He was raised Catholic and, as a child, was an altar server.[8][9] Kimmel’s mother is of Italian ancestry from Ischia, Naples, whose family migrated to the United States following the 1883 earthquake,[10][11] while two of his paternal great-great-grandparents were German immigrants. His family’s surname was “Kümmel” (“caraway” in German) several generations back.”

Question? How in the world would Jimmy’s doubtless lovely mother’s Italian family ever have been able to have “migrated to the United States following the 1883 earthquake” – if the Italian Christopher Columbus – aka Cristoffa Corombo – had not sailed the ocean blue in 1492 to discover the New World? The New World that would eventually birth the America that was sought out by Jimmy Kimmel’s own ancestors in 1883?

Over there at The New York Post,  The Federalist’s David Marcus correctly stood up for ole Chris. Wrote Marcus:

It’s a day to celebrate the contributions of Italian Americans to our nation’s history. That was the original intent behind the holiday, after all, to elevate Italians at a time when they still faced marked bigotry. But more than that, it’s a day to celebrate a man whose example of courage and determination we need, as they say, now more than ever.

Christopher Columbus wasn’t just the man most responsible for opening up the New World to the Old; he was also an example of the American Dream centuries before our nation was born.

…The upshot of Columbus’ grit and courage is nothing short of the world we inhabit today, one in which Judeo-Christian values through centuries of churn and violence have led to the freest, most equitable and most prosperous nations in our planet’s history. There are those who say that Columbus didn’t live with our modern values. That is true, but it is also true that without Columbus, our modern values might very well not exist.”

Marcus is right. Columbus Day is exactly the moment to celebrate “the contributions of Italian Americans to our nation’s history” and “to remember that an example of the American Dream centuries before our nation was born.”

While Jimmy Kimmel is too politically correct to admit it, his mother’s family deliberately sought out these shores and clearly went about the business of making a new life in America once they arrived. A few generations later, Italian American Jimmy Kimmel (his paternal great-great-grandparents immigrated from Germany) parlayed his dreams into a career first in radio and eventually television as the host of his current show, Jimmy Kimmel, Live.

Suffice to say, none of Jimmy Kimmel’s quintessential American life would have been possible if Christopher Columbus had not boldly crossed the unknown ocean and enabled the family of Jimmy’s Mom, Joan Iacono by name, to leave Ischia, Naples centuries later and cross the by-then much-crossed ocean blue to America.

It is a mark of just how dopey the Leftist “woke” culture is that Jimmy Kimmel is so clueless about the reason behind his own presence  – on television and on America’s shores – to begin with. And that attacking Columbus is in fact an attack on his Mom’s – and his own – Italian heritage.

Dems In Panic? Trump Says He May Accept Pelosi Invite To Testify