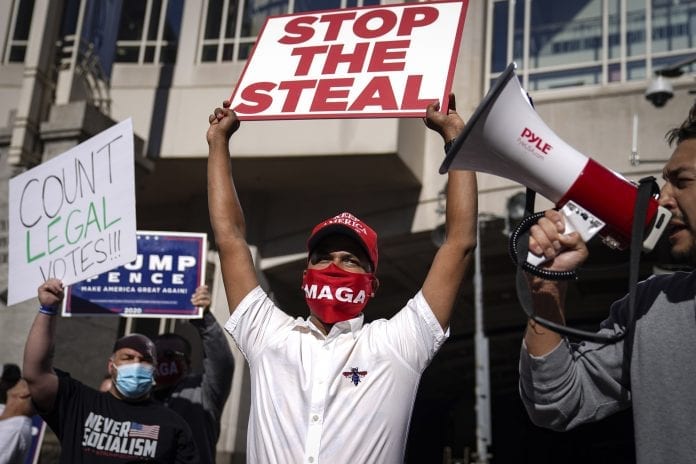 So there’s this jewel of a headline from The Washington Post:

The article, by Amber Phillips, says this of the hearing on the election held by Wisconsin’s Senator Ron Johnson in the Homeland Security and Government Affairs Committee, bold print for emphasis supplied:

“There was fraud in this election,” said Ron Johnson (R-Wis.), chair of the Homeland Security and Government Affairs Committee, who called the controversial hearing and said Monday that he acknowledged Biden’s win. “I don’t have any doubt about that.”

It’s a nebulous argument, made without proof, that allows the receiver to make what they want of it. Coming a day after Biden won the electoral college, it seems like an attempt to bridge Trump and his most hardcore allies, who seem to truly want to believe in widespread election fraud, with the reality that there was none, and with shades in between.”

Hello? A “nebulous argument”?  Those who want to “believe in widespread election fraud, with the reality that there was none”???

There is an avalanche of evidence of fraud out there. But Ms. Phillips and a whole host of others across the liberal media are spreading the same baseless falsehoods. It is almost eerily the literal attempt by the liberal media to implement this George Orwell warning: “The people will believe what the media tells them they believe.” The Post and its media allies are trying to get Americans to believe the theft did not happen, that there was no widespread voter fraud. And, again, this is bunk.

The problem for the election stealers is that some 74 million Americans aren’t buying any of this bunk for a minute. And, Orwell again: “The further a society drifts from truth the more it will hate those who speak it.”

Which is to say, the Left cannot abide by the Trump supporters – like Senator Ron Johnson in this case – who are unafraid to stand up and tell the truth. That central truth is that, yes indeed, in fact, the 2020 election was stolen.

Over there at “Here Is The Evidence” there are literally hundreds of sourced examples of voter fraud.

Here at The Epoch Times is the headline on former Independent Counsel Ken Starr’s testimony to Johnson’s committee.

Starr goes into considerable detail on this situation. The story begins:

‘The principle here is … [the] Constitution is very clear that it is the prerogative of state legislatures to determine what these rules and laws are,’ Starr told the Senate Homeland Security and Governmental Affairs Committee on Dec. 16. ‘And that was, I must say, flagrantly violated in Pennsylvania, and perhaps elsewhere as well.’”

Then there was this, also at The Epoch Times:

“A man who’s made a living developing fraud detection algorithms has discovered a curious phenomenon: Counties that started using Dominion Voting Systems machines have on average moved by 2 to 3 points to the Democrat presidential candidate from the Republican compared to counties that didn’t adopt the machines.
The difference persisted even after he controlled for a number of factors, including county population and various demographic characteristics.

‘I recommend we audit the machines,’ he concluded.”

Then there was this at Newsmax by Dick Morris:

That story revolves around fishy results in Antrim County, a GOP stronghold in Michigan. Republicans appealed for an audit of the Dominion machines in the county when there appeared to be a serious number of Biden votes that were unusual in the Republican county.  Newsmax goes on to report this, bold print for emphasis supplied:

“So, Wisconsin State Judge Kevin Elsenheimer ordered a forensic audit of the vote tabulation that had been conducted by Dominion Voting Systems.

The audit was performed by the Allied Security Operations group, a Texas cybersecurity group that included experts that had worked with NASA, MIT, the Pentagon, the Secret Service, the Department of Homeland Security, and the CIA.

The audit results were released to public view, on the order of Judge Elsenheimer, two days ago — on Dec. 13, the day before Michigan’s electoral votes went to Biden.

Investigating the reason for the obvious errors in the vote tabulation, Allied Security reported that the mistakes were ‘caused by intentional errors in the system.’ It said, ‘these are not human errors’ this is definitely related to the software and software configurations resulting in error rates far beyond the thresholds listed in the guidelines.’

I could go on and on and on with examples of voter fraud.

But the point here is the liberal media is intent on insisting that charges of fraud are “baseless.” Again, here is that headline from the Amber Phillips article in The Washington Post:

The only “election fraud falsehood” is what The Washington Post is pushing along with the liberal media.

It was stolen, with massive examples of voter fraud at hand to prove it.

And the attempt to re-write the history of this election, to rig the post-election coverage by The Post and others, is, to be blunt, bunk. It is a serious assault on democracy.

Say again: it is bunk.

Trump’s Opponents Stand Up For Anarchy

Jeffrey Lord Gets Warm Welcome at Trump Rally in Pennsylvania